In 1872 two colonial powers, Great Britain and the United States, peacefully agreed to end – through arbitration – the joint occupation of San Juan Island. Ambiguous language in the 1846 Treaty of Oregon, a boundary agreement between the two countries, led to confusion about the official water boundary and the ownership of San Juan Island. The treaty states “the United States shall be continued westward along the 49th parallel of North latitude, to the middle of said channel, and of Fuca’s strait, to the Pacific Ocean.” Because there are several channels leading from the Northern boundary at the 49th parallel and because none were mentioned within the treaty, both countries were able to place their own interpretations on the article. As a result, the territory became a disputed borderland and both countries began to establish more significant claims to San Juan Island. For example, the British owned Hudson Bay Company (HBC) established Belle Vue Sheep Farm on San Juan Island and American colonists were encouraged to settle the area. 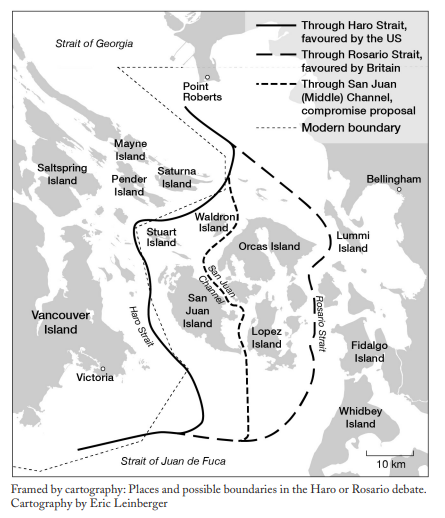 In the 1850s conflicts began to occur between Belle Vue Sheep Farm workers and American settlers that resulted in the theft of Belle Vue rams, the death of an HBC pig, a military standoff, and the 12 year joint occupation of San Juan Island. While military actions were taken on the island, American and British officials were offering proposals and counter proposals to resolve the water boundary dispute. The United States maintained that the disputed channel was intended to be the Haro Strait, while Great Britain believed that the Rosario State was the logical choice. British officials rejected the Haro Strait boundary because it would give the United States possession of several islands including the most important San Juan Island, and they advocated for the Rosario Strait because it gave them control over the entrance to the Puget Sound. Neither country wanted war but they were also unwilling to yield their claims to a region of economic and strategic value, and arbitration was suggested as a solution as early as December 1860.  However, those early attempts to resolve the dispute through arbitration were rejected by the United States because Great Britain insisted on introducing a third “middle” channel as the possible solution.

The two countries finally agreed to proceed to arbitration in May 1871. German Emperor, Kaiser Wilhelm, would make the final decision without appeal and he was directed to choose between the Haro and Rosario Straits. The removal of the third “middle channel” option was a diplomatic victory for the United States.  At the arbitration hearing, each side had the opportunity to present their case and U.S. representative, George Bancroft, presented a strong argument that demonstrated why the Haro Strait was always the intended boundary because the Rosario Strait was identified as an insignificant channel on the leading maps of the world. The British representative, Admiral James C. Provost presented a much weaker argument that the Rosario Strait was safer for navigation and more commonly used. To ensure that the final decision was impartial, Kaiser Wilhelm presented the evidence to a joint commission of three eminent German Judges and he used their decisions to rule in favor of the United States. The final ruling was issued on October 21, 1872 and British troops withdrew from San Juan Island on November 22, 1872. After 26 years of maintaining an amicable, yet tense relationship, an official survey was conducted on March 10, 1873 and four charts that showed the exact location of the boundary line were drawn and signed by British and American officials.